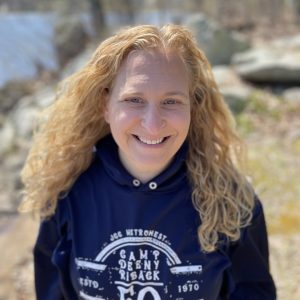 Robin is looking forward to her 17th summer with Camp Deeny Riback. She began as a camper at Flander’s Y Country Day camp in the late 1980s, and then became a counselor and unit leader in the late 1990s. She remembers sitting in the amphitheater as a counselor when camp was renamed “Camp Deeny Riback.”
Robin received her Bachelor of Science Degree in Early Childhood Education and Development from the University of Delaware and taught preschool for a couple of years. Wanting to explore her love of travel, she began working for Continental Airlines (now United) as a ticket agent and soon became a flight attendant. Robin is coming up on her 22nd year of flying, and her seniority has allowed her flexibility to make time for camp.
Both of Robin’s children started CDR at age 4. This summer, Daniel will spend his 12th summer as a LIT. Eliana will enjoy her 10th summer as a Giborim Camper. In 2018, Robin returned to camp to help in Katan and then spent the next 3 summers as a middle camp Unit Leader. In the spring of 2022, Robin became an Interim Assistant Director, mainly focusing on Transportation. In early fall 2022, Robin accepted the full-time position as an Assistant Director.
Robin loves being at camp and witnessing the magic that happens every day. She loves being a part of making an impact on so many campers and counselors.  Her favorite thing to do at camp is to sit at a campfire during an overnight and eat s’mores.   She feels lucky to have found two careers she enjoys and that she is able to find a balance between both flying and camp. In her spare time, Robin, her husband, and kids love to go on cruises and other family trips. Her family also has two dogs. Charlie is a 6- year- old Chiweenie and Scout is a 3-year-old a mini labradoodle.