A Trip to the Past: Auschwitz. Not Long Ago. Not Far Away.

Home - Blog - A Trip to the Past: Auschwitz. Not Long Ago. Not Far Away.

The bus to NYC was buzzing on my very first JCC MetroWest adults trip. My thoughts tumbled and twirled like a whirling gymnast in my mind. It was almost akin to the first day of school; will I know anyone? Will I have anyone to talk to? Will I be accepted? Will they like me? But also, the other speculations, different, though still fostered by nerves; will I become emotional? Will it be too much for me to handle? Did I bring tissues?

We were going to the largest Auschwitz exhibit ever displayed in North America at the Museum of Jewish Heritage.

The bus was full. Not just full of energized participants, but full of healthy snacks. Not surprising for a vehicle full of Jews. Scared? Eat. Happy? Eat. Sad? Eat. They tried to kill us, they didn’t, let’s eat! 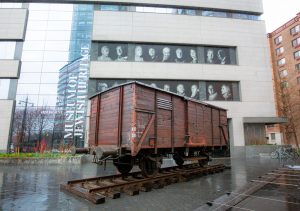 As we arrived at our destination, a cattle car that at one point delivered Jews to the gates of Auschwitz-Birkenau was our grim greeting. I was transported back over 20 years to when I visited the real Auschwitz death camp in Oświęcim, Poland. Seeing the Arbeit Macht Frei (Work Will Set You Free) sign adorning the gate to Auschwitz was a punch to the gut. So was seeing this train car and wondering, is this the train that brought my grandmother to unimaginable horrors in June of 1944?

The group disembarked and were quickly ushered into the museum. We were split into three groups and led by three different docents into the darkness of the exhibit. Our docent, Sally, explained to us that her parents were Holocaust survivors, and her mother had been interred at Auschwitz. She had been ingrained with the importance of telling their story to ensure this never happened again – to anyone, regardless of religion, race or any other distinguishing attribute.

The group was silent but attentive as Sally led us through the exhibit, consisting of three floors of over 700 artifacts. First, a map. 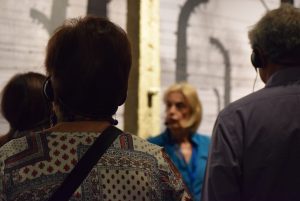 Then, the barb-wired concrete gate outside the camp, shipped for exhibition. It was unmistakably Auschwitz, shadowed against life-sized photos of the camp.

The first floor told the story of Oświęcim prior to the Holocaust, a vibrant and diverse town in southern Poland, and how it became engulfed with anti-semitic propaganda, along with the rest of Europe. One floor down, two to go, zero tissues required.

The second floor shows how that anti-semitic and fascist propaganda became actionable. Kristallnacht, the Night of Broken Glass, a pogrom against German Jews carried out in November 1938. Auschwitz I opened in 1940 to hold political prisoners. I was surprised to find it was there that I shed my first tear. Though my family never reached Auschwitz I (they, along with the vast majority of Jews, 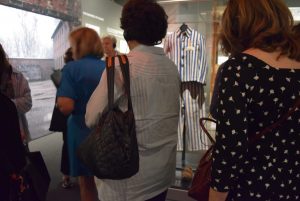 were sent to the larger Auschwitz II-Birkenau death camp about two miles down the road), a life-sized photo of the wall where political prisoners were executed by firing squads, right outside the gas chamber, brought me back to standing at that same wall in 1996, lighting a candle, and weeping silently with my compatriots – also the first time I cried that day 23 years ago, a sensitive teenager seeking my family story. Thereafter, I visited the gas chamber (again, not where my family was murdered – the gas chambers and crematoriums at Auschwitz II were destroyed in 1944, well before WWII was even over, but not before my great aunt and uncles were killed there that June) and collapsed right outside, heaving with sobs, and held up by my friends. I shed a tear for that memory that came flooding back to me, and that kid, who’s heart was broken with sorrow for my grandmother, who had died unexpectedly four years before my trip to Poland. Never forget, they say. I can’t. I just wanted to give her a hug.

Although the exhibit is rife with items culled from the titular camp, there are artifacts and stories that tell the wider tale of the annihilation of European Jewry, Roma, the disabled, political dissidents and LBGTQ. Visitors are mainly presented with Auschwitz-related materials, but evidence of the wide-ranging crimes against humanity played out at the hands of Nazi scum are readily on display to paint the full picture of the largest genocide committed in history. 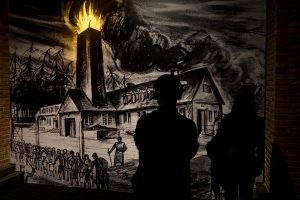 Before heading up to the third floor, the emphasis shifted succinctly to Auschwitz and Auschwitz alone, the largest of all concentration camps, the hub, where 1,000,000 Jews were gassed to death. The rooms became darker and the walls were filled with graphic artistry, mural-sized drawings of the gas chambers, as no photographs exist. Spotlights rained down on a scaled reproduction of the camp, bathed in white, drawing us closer to the escalator to the third and final floor. We had arrived at Auschwitz.

When thinking of Auschwitz (though I try my hardest not to think about Auschwitz), several iconic images, for me, come to mind. The trains pulling into the tracks. People lined up for selection with Nazis deciding who will live (go right) and who will die (go left). The barracks, tattoos, shaved heads. And then, the gas chambers. Large chimneys billowing with smoke, the ashes of our ancestors being tossed in clouds below.

That is what greets us on the third floor. The door to the gas chamber. The chute where Zyklon B pellets were tossed to deliver their deadly concoction to the innocent, unsuspecting, trusting – being told they needed to shower. It’s powerful and Sally needn’t say much to instigate the impact. Just historical facts. 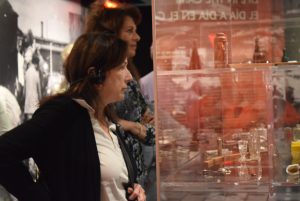 From there, it’s like entering into the camp. The wall of a barrack is present, along with suitcases, a baby carriage, personal items like razors and empty vessels once holding creams and tinctures. Clothing, shoes, blankets, a trumpet, the table where Dr. Josef Mengele conducted his infamous experiments, namely, on twins. It’s here that I grow stoic. Detached. Not because the exhibit is ineffective; in fact, quite the opposite. For self-preservation. Because I realized I forgot to bring tissues. Because I cried all those tears outside the gas chamber at Auschwitz that day in 1996. This feels like the real thing too, but I just can’t conjure those emotions. My earlier worries were indeed whittled away; I did connect with my fellow trip-goers, they were indeed nice, they did speak to me, I was not a social pariah. Yet I couldn’t bear the thought of my new friends picking me up from the floor. We concluded our tour. I shed one tear. I was okay with that.

It’s strange to say the rest of the afternoon was pleasant, but it was. We had a delicious lunch from the museum’s Kosher restaurant, Lox, 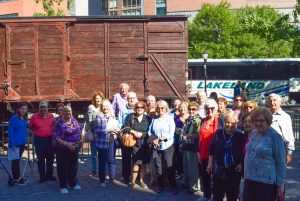 all provided as part of the price of the day trip and distributed in a private room where our group could decompress. We didn’t speak much about what we’d just seen. It was a lot to take in. Our minds (and mouths) turned to different topics. Then, a few hours to ourselves. I spent my time outside the museum, overlooking the Statue of Liberty and enjoying the very late summer sun. It was a beautiful day. Everything had been taken care of for us, from start to finish. The only thing I had to worry about was what I’d just experienced, the fear that history repeats itself, and what my children have in store for the future.

We took this picture. We boarded the bus. We arrived back at the J ahead of schedule – more snacks on the bus – bid our friends adieu and tried to forget – but just for that day.

Meet the Jews of Cuba - Face-to-Face!